CoverIntroductionKey Civics and Government ConceptsDefining Critical Media LiteracyCritical Media Literacy GuidesTopic 1. Foundations of the United States Political System1.1 Social Media Policies and Community Standards on YouTube, Twitter, TikTok and More1.2 The Internet as a Public Utility1.3  21st Century Women STEM Innovators1.4 Media Coverage of Kings, Queens, and Royal Families1.5 Representations of Native Americans in Films, Local History Publications, and School MascotsTopic 2. The Development of United States Government2.1 Declarations of Independence on Social Media2.2 Media Marketing and Government Regulation of Self-Driving Cars and Electric Vehicles2.3 Representations of and Racism Toward Black Americans in the Media2.4 Political Debates Through Songs from Hamilton: An American Musical2.5 Bill of Rights on TwitterTopic 3. Institutions of United States Government3.1: Hollywood Movies About the Branches of Government3.2: Writing an Impeachment Press Release3.3: Members of Congress' Use of Social Media3.4: Political Impacts of Public Opinion Polls3.5: Website Design for New Political PartiesTopic 4. The Rights and Responsibilities of Citizens4.1: Immigration in the News4.2: Portrayals of Immigrants in Television and Film4.3: COVID-19 Information Evaluation4.4: Women Political Leaders in the Media4.5: Online Messaging by Special Interest Groups4.6: Digital Games for Civic Engagement4.7: Social Media and the Elections4.8: Images of Political Leaders and Political Power4.9: Media Spin in the Coverage of Political Debates4.10: Celebrities' Influence on Politics4.11: Political Activism Through Social Media4.12: Media Recruitment of Public Sector Workers4.13 Deciding What Books Students Read in School4.14: Images of Teachers and Teaching4.15: For Whom Is and Could Your School Be Named4.16: Representing Trans Identities4.17: Media Framing of the Events of January 6, 20214.18: Music as Protest Art4.19: PACs, Super PACs, and Unions in the Media4.20 Brands and PoliticsTopic 5. The Constitution, Amendments, and Supreme Court Decisions5.1: Prohibition in the Media5.2: The Equal Rights Amendment on Twitter and Other Social Media5.3: Civil War Era News Stories and Recruitment Advertisements5.4: Representations of Gender and Race on U.S. Currency5.5: The Equality Act on Twitter5.6: Reading Supreme Court Dissents Aloud5.7: Television Cameras in CourtroomsTopic 6. The Structure of State and Local Government6.1: Native American Mascots and Logos6.2: A Constitution for the Internet6.3: Military Recruitment and the Media6.4: Your Privacy on Social Media6.5: Pandemic Policy Information in the Media6.6: Gendered Language in Media Coverage of Women in Politics6.7: Gender-Neutral Marketing of Toys 6.8: Environmental Campaigns Using Social Media6.9: Trusted Messengers, the Media, and the Pandemic6.10: Online Campaigning for Political Office6.11: Advertising the Lottery Online and In Print6.12: Local Governments, Social Media and Digital Democracy6.13: Protecting the CommonsTopic 7. Freedom of the Press and News/Media Literacy7.1: Press Freedom in the United States and the World7.2: Objectivity and Reporting the News from All Sides7.3: Investigative Journalism and Social Change7.4: News Photographs & Newspaper Design7.5: How Reporters Report Events7.6: Recommendation Algorithms on Social Media Platforms7.7: YouTube Content Creators7.8: Fake News Investigation and Evaluation7.9: Paywalls and Access to Online News7.10: Critical Visual Analysis of Online and Print Media7.11: Memes and TikToks as Political Cartoons7.12: Women Reporters in the Movies7.13: Design a 21st Century Indie Bookstore 7.14: Greenwashing and the Media7.15: AI Writing Tools and Political Information
Critical Media Literacy and Civic Learning

Artificial intelligence (AI) tools are already prevalent in our lives - from recommendation algorithms on social media and streaming platforms to facial recognition used to unlock phones and computers to autocorrect and autocomplete features in email and text messaging apps. But AI tools are often invisible - meaning that we don't spend a lot of time thinking about what they are and how they work (maybe we should!).

ChatGPT functions as a digital writing producer for users. Almost instantaneously, it circles through its database of text to produce natural sounding sentences and paragraphs in response to a prompt from a user. It can write essays, draft emails, create a list of ideas for a birthday party, write lesson plans, offer step-by-step tutorials for solving math problems, write blog posts and articles, draft a cover letter or resume, suggest life hacks or financial tips, describe complex scientific processes to different age levels (e.g., describe string theory to a 5 year old), write code, and create content in multiple languages. It can even write a poem about golf in the style of Dr. Seuss! 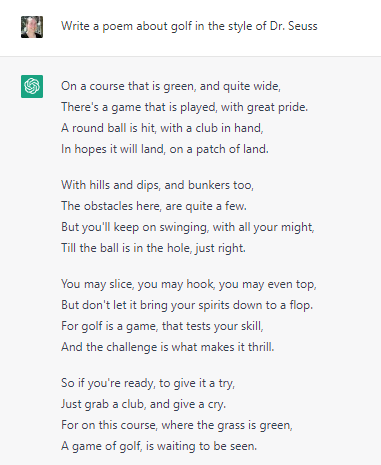 Such results are amazing, blurring the lines between what humans can do that machines cannot.

Take this quiz from the New York Times to see if you can tell if a fourth grader or the new chatbot wrote an essay.

But, what are the implications for everyday citizens when politicians, campaign managers, and political staff can have AI writing tools draft press releases, campaign slogans, social media posts, blogs, and more?

ChatGPT also brings with it real complexities and dangers. Technology researcher and educator Torrey Trust has shown that the system is not always safe or reliable as a information source (see ChatGPT & Education slide deck).

Safety and reliability are particularly important when the information is political. In our media age, politics is increasingly conducted online. Political figures, political parties, political lobbying groups, and interested citizens, all with political messages to convey, use social media and online sites.

If AI tools produce false or misleading claims, then people’s roles as democratic decision-makers are curtailed, distorted, even blocked. In this context, how do we learn to analyze what we are reading politically to distinguish authentic from false and AI from human?

NOTE: Before you begin this activity, please know that ChatGPT is not to be used by children under 13 years old (see the privacy policy) and the Terms of Use state that the user must be 18 years or older to use the tool. Therefore, it is recommended that the teacher use ChatGPT to generate text for students to analyze, rather than asking students to use ChatGPT on their own.